This project has been brewing in my mind for well over a year. I love the Historic series Streamliners with the cat eye soundholes. I don't have the heart to radically alter a perfectly good guitar so I patiently waited for a husk to appear on eBay.

My patience was rewarded by this trashed out Gretsch G3155. The fretboard has some severe warping and gouging in the wood. The back of the neck was sanded down to the bare wood. For what purpose, I don't know. All of it's parts were gone. Just a sad, sad, empty shell.

The front isn't in bad shape with one minor scratch. I think that I'd like to paint the guitar an off-white color instead of the red.

The fretboard is in terrible condition, much worse than you can see in the photo.

The cure.
I wanted to have a three pickup guitar and decided on P90's. These are a set of handwound Kent Armstrong P90's. Originally I was going to put a tremolo on this one, but ran across a very cool looking trapeze tailpiece with an "S". "S" for Sarah or Streamliner. I will have the same style "S" inlayed into the headstock under "Gretsch".

The control layout is going to be very simple. I've decided to have all of the controls near the upper bass and treble side of the bout. It will have a master volume and ToneStyler tone knob on the treble horn. It will have seven way pickup selector switch on the bass side horn.

In the beginning I'm probably going to keep it red until I can afford to paint it. It's kinda expensive!
It will have two additional cat eye sound holes cut into the top and bound like the other two. You will see there is still a little hole on the lower end of the bout. This will have a simple kill switch so I can cut all power to the amp.

I'm thinking it will likely need a little support between the cat eyes and I will defer to my guitar tech on that. It will likely be a wood web or a wood pin/column support.

This will give you an idea of what the finished product will look like. 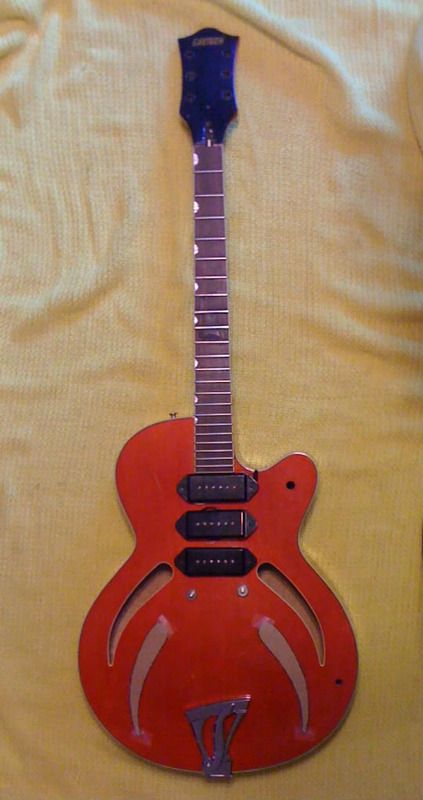 The first step is to remove the damaged fretboard and put on a new Pau Ferro fretboard. It will also get a new bone nut.

The tuners are Grovers.

The three P90's are handwound Kent Armstrong. I'm going to change out the black covers for cream color.

The StellerTone ToneStyler pot is very cool. It is a 16 position pot which increases the tone range on both ends of the spectrum.

The TruArc bridge is aluminum with additional holes bored through. I'm very curious to see how it performs. It looks very cool as well.

The "S" tailpiece seemed a natural choice when I saw it on eBay. S for Sarah or S for Streamliner. Tim Gibson does awesome inlay work and will put the same S on the headstock.

Since the fretboard hasn't been glued on yet I figure it was better to do the inlays first so if I mess it up I can just buy another fretboard and start over. The block markers I've designed are hard to discribe so it wil be better to just show you as soon as I make them. They will be white MOP with turquoise stone inlayed.

I've decided the painted on logo of the Streamliner has to go and replace with real inlay. The new logo will also be out of turquoise stone.

I bought a piece from LMI to see how hard it is to work with. It is made of 80% reconstituted turquoise stone and 20% resin. It is supposed to cut with a jewelers saw and be sandable as well as worked with a file.

Here is what the stone looks like when you buy it.

I photographed the logo from a friends (Hot Rod Michelles) Gretsch White Falcon. I kept resizing it on paper until I had the size I wanted.

Using Elmers glue, I glued the logo to the stone.

I also bought a Jewelers Saw and spare blades from LMI. I watched some videos on how to cut inlay. From what I saw I made myself a little jig/platform out of some scrap bamboo flooring with various sized cutouts so I can get the saw in there and have a firm surface for the stone to sit.

After some careful sawing I had a nice roughed out "G". I used warm water and Q Tips to soak the Elmers glue and paper off. Next I start using some mini files to clean up edges and saw marks. They worked great! I'm going to have to find a magnifyng lens so I can really see up close when I'm working.

So far, I'm happy with how it turned out and I'm gaining confidence that I can do this.

I should have the rest of the logo all cut out over the weekend.

I remember you talking about this project Sarah, glad to see you're on it again and we can follow it

Interesting project there! Gonna look great with that turqoise in there. I would have thought that the painting would be some of the least expense (if you do it yourself).
Dennis
So many guitars; So little time ..
Top

GattonFan wrote:Interesting project there! Gonna look great with that turqoise in there. I would have thought that the painting would be some of the least expense (if you do it yourself).
Dennis

Y'know, that's an excellent point. I've never spray painted anything before so the idea of it is kinda scary to me. I don't have a compressor nor paint gun or any other painting tools for that matter. I just assumed it needed to be done by someone who does that sort of thing.
____________________
1965 Mosrite Celebrity Prototype with Vibramute
1972 Mosrite Celebrity-III
1977 Gibson MK-53
1982 Fender Bullet
1994 Gretsch Streamliner G3155 Custom
2005 Gibson Les Paul Standard Plus
2006 Jude Les Paul 12 String
Top

Bob got that right. I LOVE my H60C with the flames and planetary scheme. Hard to describe how really beautilful these guitars are - have to see it in person.
Dennis
So many guitars; So little time ..
Top

Bob got that right. I LOVE my H60C with the flames and planetary scheme. Hard to describe how really beautilful these guitars are - have to see it in person.
Dennis

I didn't buy that one - but had one built similar to that. They're all different, works of art, really. Whatever inspires Jarrett, I guess. Mine has the flames and a recurrent planetary scheme in various places on the body and headstock.

Dennis
So many guitars; So little time ..
Top

Just a word of caution...that neck looks like it's had a lot of play on that bare wood...a preference of some guitarists with a nasty consequence. The wood could be "punky" now, and a big part of the warping in the fretboard. If you want this one to play up to its potential, consider a new neck.

Personally, I use a light Swedish oil, and seal the back of the neck with a couple coats for people who prefer unfinished necks...they never tell the difference, and the neck survives very nicely. Some of us have very sweaty hands, and the lacquer gets real sticky as we play, whereas the "bare" wood never does...

Users browsing this forum: No registered users and 20 guests